A few photographic effects for your perusal..and Storm Angus

Kind of storm ravaged. Okay…not at all, just the tail end. We didn’t get this all half as bad as the south of England, if you wish to, you can read about the main bits in the Daily Telegraph.

Cue the normal film (courtesy of YouTube on this occasion) on the evening news of people who should know an awful lot better canoeing in the street, standing perilously close to waves crashing onto beaches, generally being a teeny bit dull or driving into water that is far too deep.

Honestly, if I knew that Newhaven and Brighton and similar areas were going to get this much coverage in the years after I moved to Wales, I wouldn’t have bothered coming! Only kidding. Still, at least I stayed relatively dry. The wind was perishing cold though, that was what bothered me the most as I don’t have an awful lot of meat on me. This is due to get less after Christmas too as I will be embarking on a proper 12 week training regime to do a further sportive bike ride of 100 km (60 miles) in aid of charity. I was looking at the handy downloadable training timetable and I am struggling to think of routes that fulfil the length of time or distance needed and also go in a loop to assist me in not transporting the bike around the county in a car that is too small for it. I’m sure it’ll be fine.

However, let us not be bothered by my good deeds. You read this for my wit and pictures don’t you? I like to think so, but I could be having a one-way conversation with the vast internet. So let us begin.

Iridescence. Difficult to spell, even more difficult to spot. More difficult to photograph than both of those things. I think I have posted images on here with some “mother of pearl” effects in some winter clouds but these are not to be confused with the proper nacreous or polar stratospheric clouds.

In this instance, you have to look very carefully at the tips of the dead clematis flowerhead I took a picture of a while back… 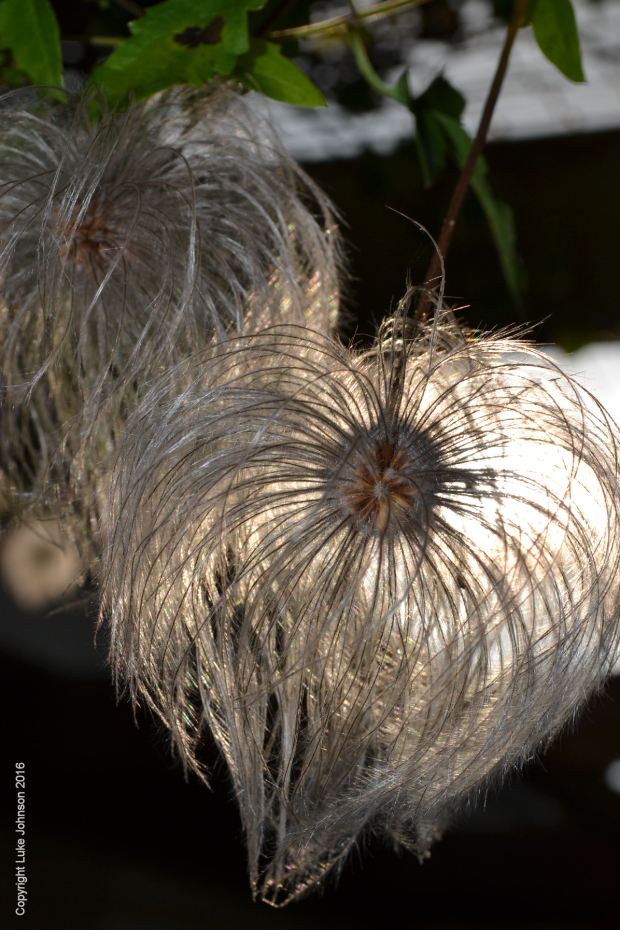 I never noticed the fact there was some iridescence in this image when I took it to be honest but looking at Mr Wikipedia…thanks be to Wikipedia…it says that the effect is generally created by microstructures that interfere with light, which figures as these flowers are very intricate and the flash fired in this image.

On to a more familiar subject, the sky, but a more unusual effect in the clouds than usual. You may remember a while back that I pointed out some oh-so-catchy Kelvin-Helmholtz instability in clouds at sunset that caused what look like cresting waves? In a nutshell, it’s the interaction of two fluids of varying density such as the wind creating a wave on water (yes, air can indeed be construed as a fluid in science). It seems that the effect can go full circle (pun intended) and create what essentially looks like a corkscrew. 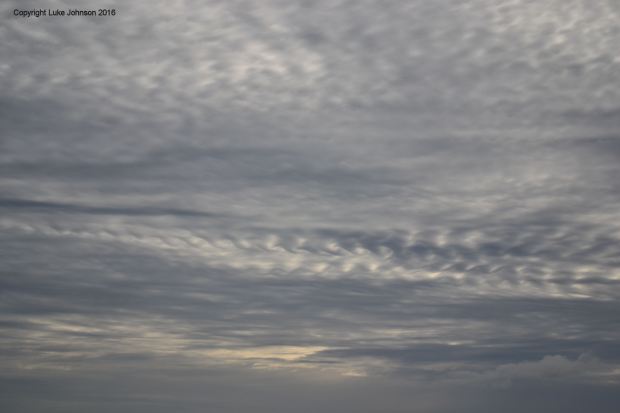 Pretty cool, huh? I have only seen this the once and I can only find a few images on the internet that are similar, so you never know, I may have stumbled on a new cloud type! I will name it “the screw-mulus”. Or I could be over-thinking things….yes, the latter.

Now, moving away from science but to return to it in a little while, some sunset pictures I took just because and in the order of this post heading towards the end of the day in subject matter. Not that many sunset images at all this year, seems we have way too much low cloud now, so there will be fewer and fewer of these images of feathery loveliness… 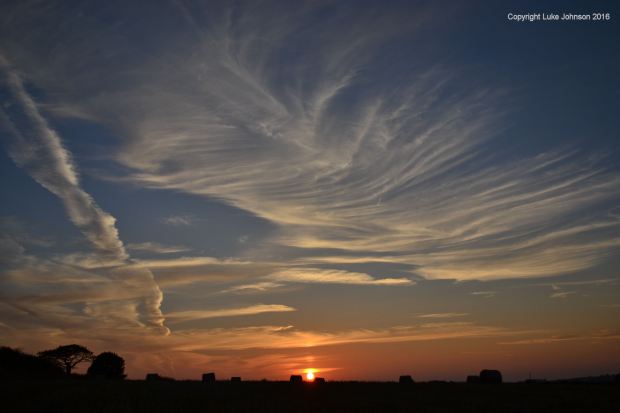 This next one is an unusual one as there are quite a few “straight” lines in the cloud. I say straight with a little bit of a nudge as they aren’t ruler straight, but in nature, you very rarely find anything too straight, so when you see it, it’s usually due to interaction with something unexpected…in this instance, I suspect the contrail on the right at a similar angle has something to do with it. 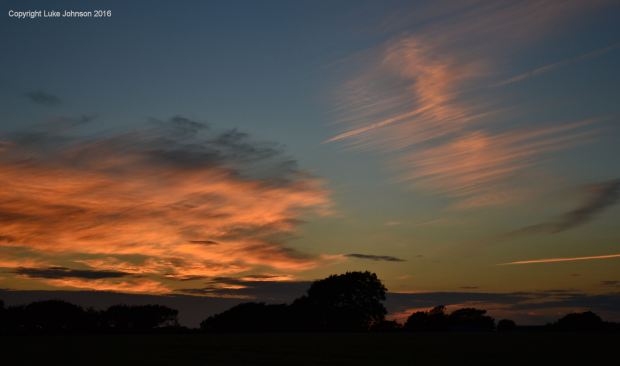 Back to science! Rays. In particular, crepuscular rays. I have posted many images on here of these rays but now I present to you a rarer image of….anti-crepuscular rays. It is pretty much the same thing but you see these opposite the sun, not around it, behind a cloud or such like. The rays are caused by the interaction of the light with an object out of your line of sight due to the curvature of the Earth, so as the sun dipped just below the horizon here, a little cloud got in the way, casting this shadow… 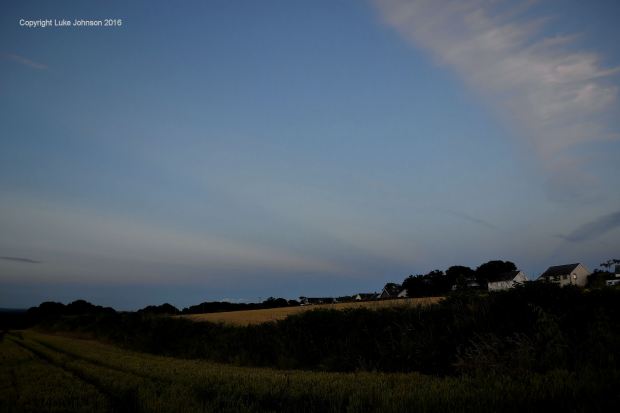 Apologies for the dark image, I had to fiddle the contrast to enhance the rays somewhat. However, talking of dark brings me nicely to my last image for this post, a nightscape. I don’t often do these, as it’s not an area I have a great deal of skill in, but I try. I took this of the refinery and fuel storage areas around Pembroke (on the left) and Milford Haven (on the right) from Pembroke Dock. 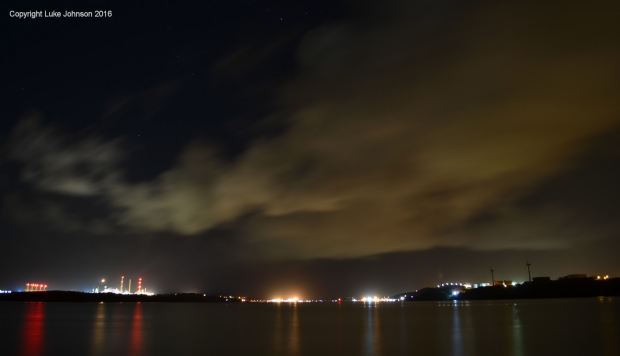 I even managed to catch a little starlight in the image which was not my intention, but it adds a little depth to the inky black bits. I might try this further in the future, but I find them a little boring being so dark and having a not so well suited camera for this kind of stuff. We shall see.

Well, there you have it for another post. Before I go, just a couple of things…I need one more follower to reach 50 so if you have a friend or relative who can stand my infrequent babble, tell them to pop to my site on a PC and click the “Follow Me” link at the bottom right. Thanks!

Also, I have changed a few bits on the site such as the background banner and post text. Hard to read, too small, too large? Constructive criticism is very much welcomed!

Cheers in advance and see you soon.

In the depths of the Preseli Hills

Posted by lukegeoffreyjohnson in clouds, pembrokeshire on October 24, 2013

It’s late and I’m typing a blog…things must be bad. Had a bit of a tiring day overall and now the wind is blowing hard outside so I probably won’t get much sleep. I can tell Friday is going to be heaps better!

On occasion, when I am at a loose end (fewer and fewer of those) I head up into the Preseli Hills north of where I live. When I first had my camera I noticed a ruined building out in the fields off the road as you climb over the pass. In the first instance, I thought it was private and I shouldn’t approach it but after a while I though “Forget that, let’s have a look”.

As with all good trespassing opportunities, there’s very little handy parking nearby so it’s a take-your-life-in-your-hands walk along a blind verge to get to the gate where there’s what looks like an old railway car rotting away… 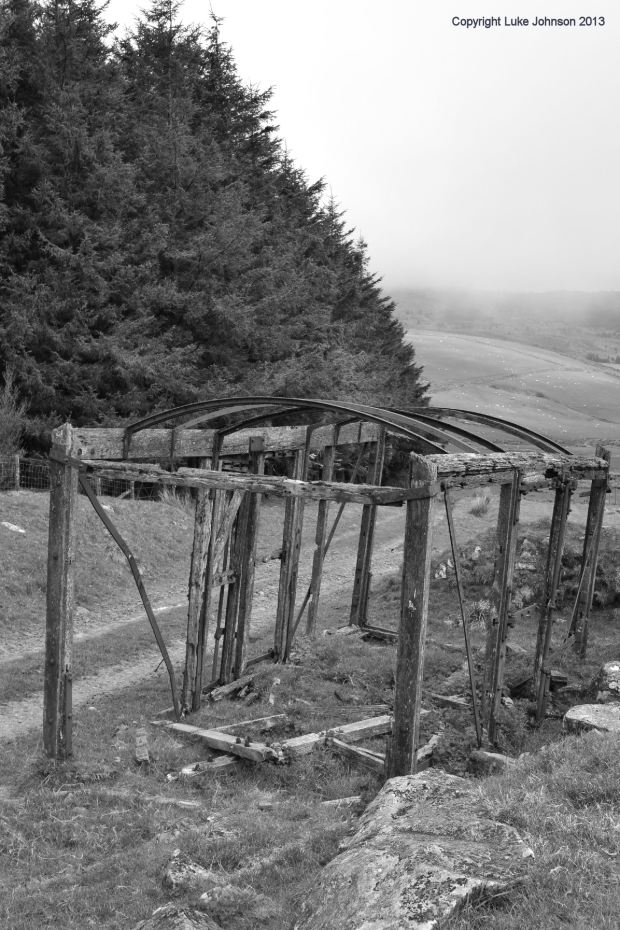 Then there a bit of a steep incline down the hill towards the “farm”…I presume it was a farm which, on this occasion, was absolutely surrounded by sheep. The Preselis are a prime grazing area and also this are is also used for managed timber (which you can see in the top part of this picture partly covered by the clouds). 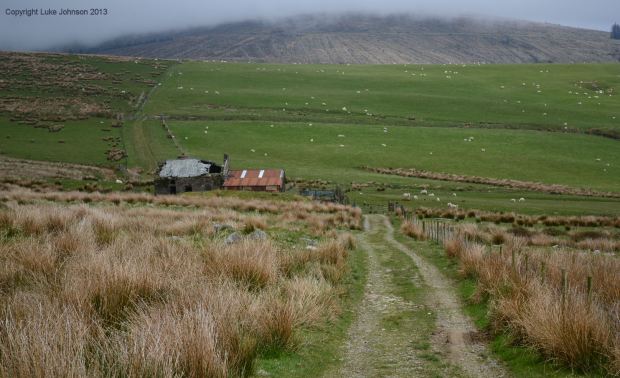 You can almost hear the howling wind…..

Quite a ramshackle affair isn’t it? I can assure you that it’s not better inside. In fact I only ever went in once when I first ventured down there…I daren’t now as the whole place looks on the verge of collapse! Mind you, if you want slate tiles or corrugated iron, this is the place to come. 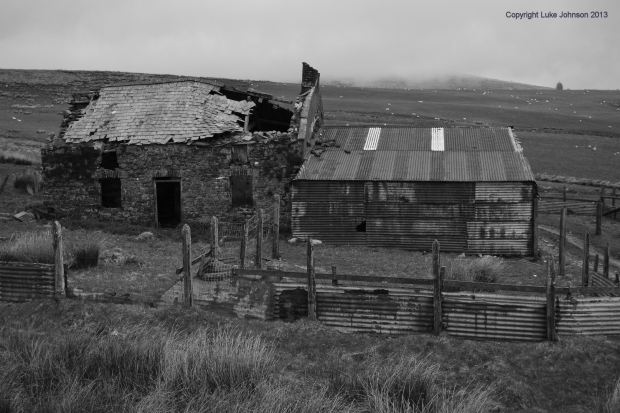 Discretion being the better part of valour on hearing the engine of a quad bike, I started to wander back up the hill think what excuse would be plausible for a rustic Welsh farmer…or whether I would even be able to understand them. Look back down you can see that the areas is on the edge of a little fir copse and the area is pretty wet and boggy, hence the small patches of reeds. 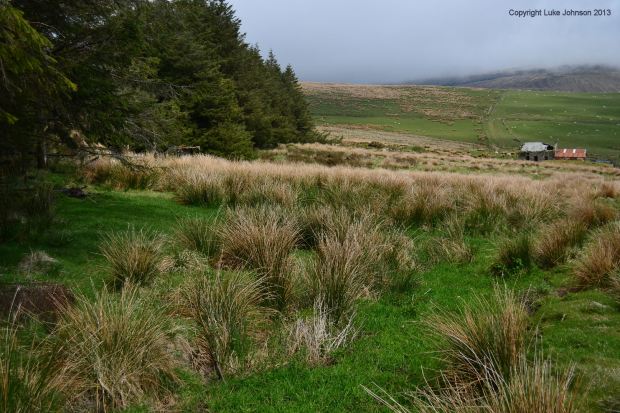 Lucky I was wearing boots here, it looked quite dry until I stepped on this area!

Walking next to the trees I was quite taken by how straight they are, even though this is one of the few places that always seems to be windy in the county. I crouched down a little to get a bit more perspective to get this picture… 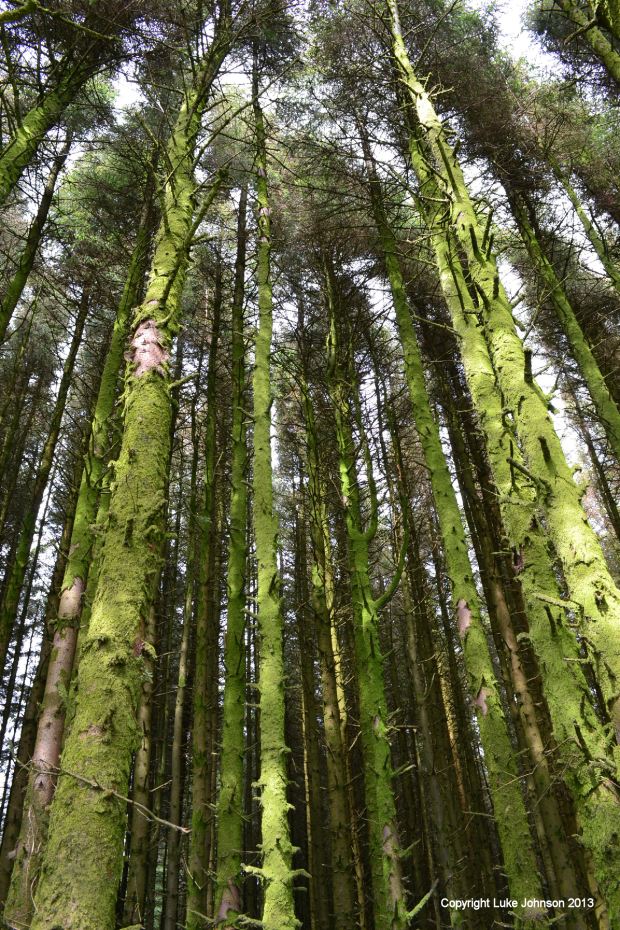 The trees really were this green, I said it was very wet!

Overall though, I do like it here. there is a reservoir nearby too that I have also featured on my blog but it looks blooming awful at the moment as all of the tree have been cut down both sides of it. In fact, I say cut, I really mean shaved. It looks horrible. Mind you, trees are a crop like any other I suppose, so I can’t blame them for cashing in.

Later that week, I was looking at taking some sunset pictures and I managed to actually catch a picture of something I usually only see a fleeting glimpse of….iridescence. Nothing spectacular and quite faint (along the inside of the “C” shape), but unusual nevertheless. 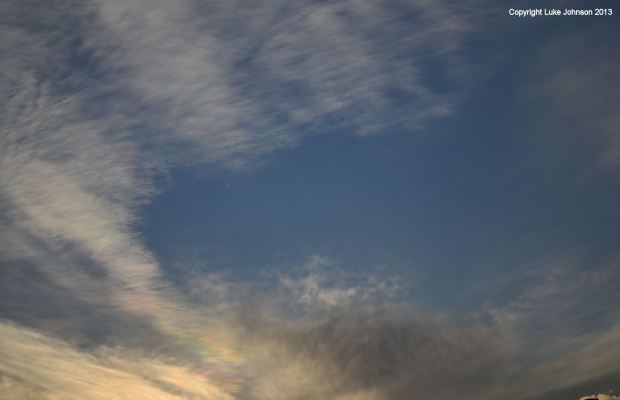 If parts of clouds have small droplets or crystals of similar size, their cumulative effect is seen as colors. The cloud must be optically thin, so that most rays encounter only a single droplet. Iridescence is therefore mostly seen at cloud edges or in semi-transparent clouds..

There’s another thing you have learnt from me. But please, don’t go staring at the sun looking for this…it’s dangerous!

Until next time, take care and thanks as ever for dropping by.