Posted by lukegeoffreyjohnson in clouds, pembrokeshire, sunset, weather on April 26, 2014

I have been away for the past weekends so apologies for the late post but I did promise that there was a bit of colour arriving in this one and it will be later on. When I was reviewing this images I was picking I didn’t actually realise I had taken some stormy cloud images in the morning before going to work and then the sunset ones were the same evening, so they all slotted together nicely.

I know what a few of you are thinking…”oh my god, more clouds, does this guy ever do anything else?”. Truth be told I’d love to be a professional cameraman and photographer but seeing the options you appear to have in these areas of work are dangerous and/or don’t pay the bills, it’s a bit of a no brainer that I do this as a hobby. I try to get out to be artistic but time is limited for this and so the local area is my playground….it just happens that there was a lot of weather activity this particular week. I can see more storms in the next batch of pictures but after that I did take a trip into the Preseli Hills so I shall include those too. Thanks for sticking with it!

Anyway, onward to the pictures. A few images to start the day is the best way (I usually don’t eat breakfast as I like my bed too much). This morning had been after blustery night and a blooming huge storm was passing by in front of the sun….. 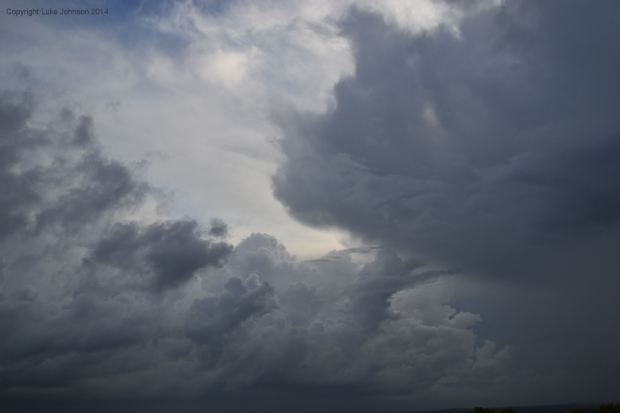 However, my struggling to get the right settings on the camera didn’t work all that well and I’m afraid the silhouetting that I was picturing in my mind didn’t quite work. I didn’t get wet though as the rain seemed to be falling a few miles away as far as I could see….

The sun is behind there, honest

Amazingly, almost 10 minutes of so from the first image, the skies began to clear and left this wonderful mix of high, medium and low cloud shooting around overhead. Lovely….

Minutes later and who would have known there was a storm there even?

After the tap had been turned on umpteen days during the day when I was at work, even with a little hail if I recall correctly, the evening was a clear as crystal save for a few wisps of cirrus in the far distance (probably over Ireland). My trained eye could see that was going to be a good one but silly me didn’t look properly until late on, so, instead of my usual haunt, I was relegated to standing on top of a pile of grass cuttings in the back garden for this image! 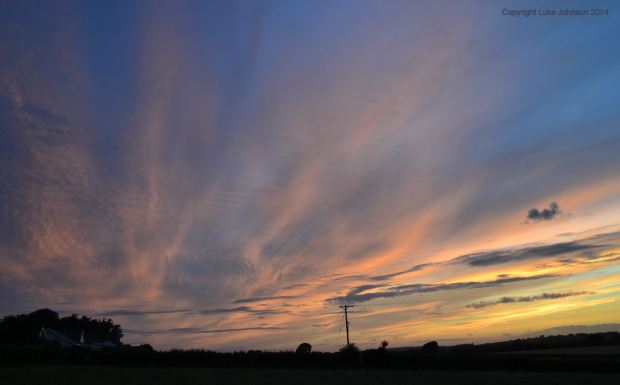 Taking a picture whilst sinking….not ideal

I decided that the soft ground I was on wasn’t the best so I decided to move on by jumping over our back fence down into the field to get under those cursed telephone wires (thanks BT). Seems that was a good choice as the pinks and red got deep, so much so, I was really struggling with the low light as you can see!

Low light seems to be a weakness of mine in this set!

I confess I had to crop this image a little as the noise really crept in around the edges…sorry. I shall tell myself off later!

The pinks are fading now leaving a lovely dark streak…..

As the finale, typically enough I had found the perfect setting to get that nice “cosmic paintbrush” effect I always talk about. If I was allowed to put the pictures up all over the walls of the house, this would be a “framer” I reckon, I really like it because it’s so smooth. Anyway, enough of me spouting about sunsets, I will lose your attention if I am not careful. 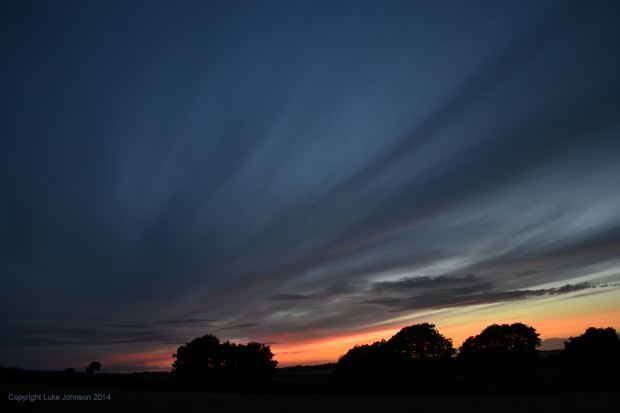 Not a bad finishing picture I think….where’s that frame?

Next time, I promise less clouds and more of other things OK? I did manage to get some nice pictures in the mountains so there should be some good project stuff coming your way…even a dragonfly I remember seeing.

Remember, if you fancy a copy, don’t cheat and download it even though I am happy for you do that; I am happy to send you the original by email in return for you “bigging me up” on your own blog or something. Fair exchange? Or even comment on any improvement you’d like me to make in taking them…all criticims gladly received.

Thanks for dropping in again and thanks to my followers which number near the half century at the moment. Much appreciated. Take care and see you in the near future for more Pembrokeshire pictures.

Posted by lukegeoffreyjohnson in clouds, pembrokeshire, sunset, weather on April 5, 2014

Due to be a busy weekend here for a number of reasons, so I thought I’d take the opportunity to finish off this post. It’s also raining too…well, a mix of mist and rain, so there seemed little point in venturing out at the moment. I even cleaned the fish tank this morning too. I think they were grateful but there were many panicked splashes from fish trying to escape the nets and such!

Anyway, on to the second part of this asperatus I promised you. By the time I had taken these images, things were well and truly cleared ( no evil eye shapes in the clouds as one comment I received said) but there were a few showers flying, which you can see here…. 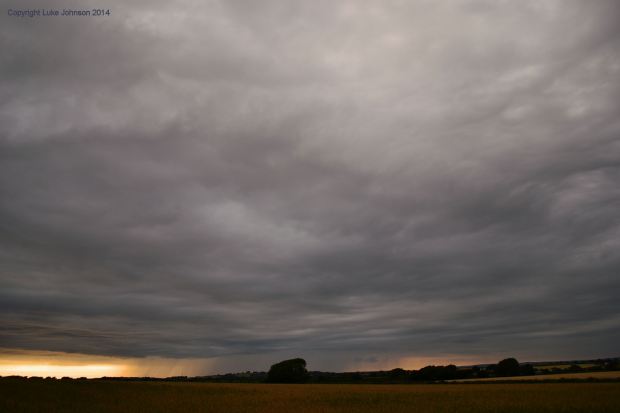 I will admit to a little change in the contract here to bring out some lines in the cloud….

As I said last week, these pictures were all taken on the one day and I had plenty of time to wander around to different spots I use (although judging by the distance covered, I suspect I used my bike). On the way up to one, I was quite surprised to be engaged by a horse in a field on the way; it seemed a touch shy and wouldn’t let me stroke its nose, maybe because it still hurt from bashing out the bits of wood in the gate! Horses like to see what’s going on! 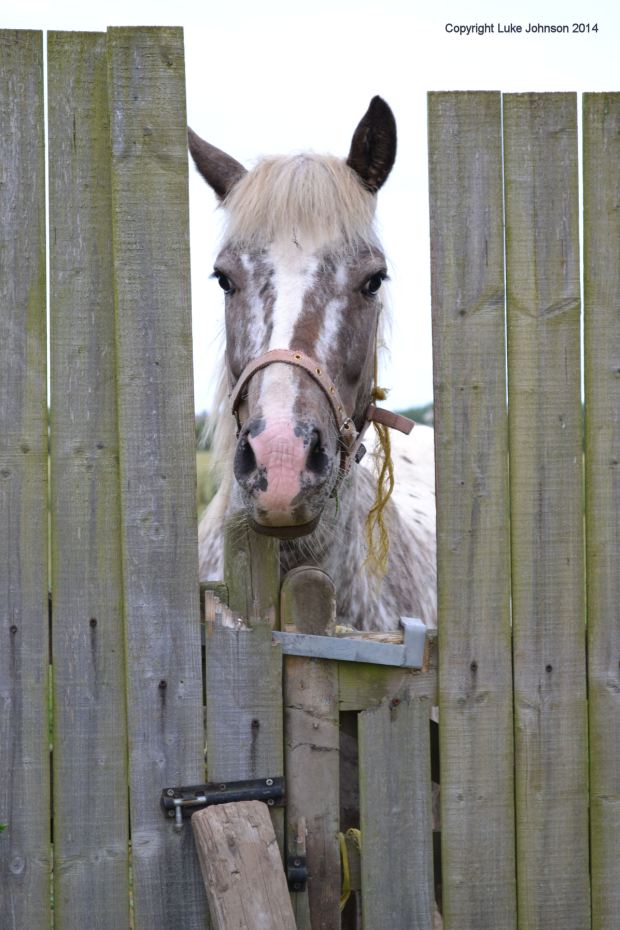 Along from there, there was a field that time had forgotten it seemed. As you can see, the little trees were all gnarled and stunted and surrounded in places by abandoned farm machinery. Looked quite nice though and I will bear this place in mind for more detailed pictures come the Summer. I can only presume these bits of machinery are useless now….

No idea what to do with farm machinery? Abandon it in a field!

However, from the gate, there was a nice view of the shower I spotted earlier over Haverfordwest that still appeared to be there. There were some really nice oranges in the clouds now but as you can see, things were starting to clear after the solid cloud of the past few hours. I believe the saying my Nan used was that “there is just enough blue to make a pair of sailors trousers”…. 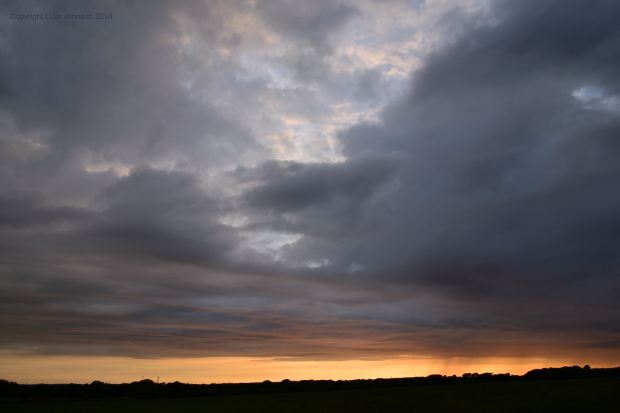 Bye bye asperatus, hello cumulus and cirrus…still some rain over west though

Wandering (or riding…I now think this is most likely as the next set of pictures were taken a fair distance away) my way back to one of my usual haunts, there had a been a teeny bit of drizzle and this had woken up a small snail who was running (!) for cover along a bramble leaf in the hedge in front of me…..

To finish the day, a nice sunset. I’m sure most people who see sunsets like this don’t describe them as nice but I though the orange and pink glow on the clouds was lovely and I got a nice glow from the crops in the field too, which I find incredibly difficult to do most times I try, so it was a victory for me!

And as a finale to the day, a nice sunset….

Well that’s the lot from this day…the 4.00 pm until 9.30 pm all day weather shoot. Okay, so it’s nothing on storm chasing in the US or Australia, but it’s fairly unusual to see such vivid clouds in Wales. I wonder how many people even noticed that this was happening? Such a shame if it passed them by.

Thanks for dropping in and I’m very much appreciating those likes from people…please keep them coming. There are a load of sunsets coming up at a quick glance into the new folder so, if you like colourful evening light, keep tuned in!

See you soon, I hope.