Posted by lukegeoffreyjohnson in holidays on August 24, 2014

Yes, I know. Where have I been? Well, I have been on hols in Devon for the last couple of weeks, but now I am back, full of a cold or something similar so every word I type is accompanied by a sniffle. Very annoying.

The weather whilst I was down was pretty good. There was more opportunities to be out than there were days stuck indoors. However, whilst I was there, we did get the tail end of a hurricane from The Colonies. The weather forecast told us to nail everything down and prepared to be drowned in ridiculous amounts of rain but, in the end, the malevolent weather was more a damp squib. I remember the extent of my clean up was kicking a few small branches across a car park on the way to my motor and then moving a plastic box in the road to save from running it over! Zombie apocalypse avoided. However, I don’t mean to belittle anyone else who may have had it worse, so please don’t misunderstand my jovial banter.

Anyway, to the matter in hand. Bruges and one of my first wanders around the city centre. Now, a good rule to follow when doing wanders such as mine is look where everyone is going, then walk the opposite direction. I don’t want the touristy attractions or prices, thank you. However, I can’t help that some of these first views are very touristy so apologies but the building were so pretty, shame about the weather 😦

Pretty sweet to be a government building eh? Beats mine hands down.

Believe it or not, this building was the back of the local police station. Classy! I’d work there if I could speak Flemish. However, I can’t. In both images you can see the beginnings of the vastly reduced canal system as well with one of the expertly driven boats just coming into view in the image below….

This is the kind of stuff I mean about wandering off the beaten track. I had more of a sense of smell than I have now and caught the distinct whiff of…sniff, sniff…fish. I’m a seafood lover me. Put prawns on it, I will eat it. Apart from avocado, as they are grim. I’m sure I went all around the houses to get here, but I eventually arrived at this local fish market. You could tell it was local as no-one spoke English. There appeared was a big pot of seafood broth boiling away whilst the fisherman/women (I guess) served the catch of the day. I missed out as I would have happily had a serving of the broth but couldn’t muster the linguistic skills to ask whether it was indeed for sale or whether it was even a broth! Hey ho, never mind. 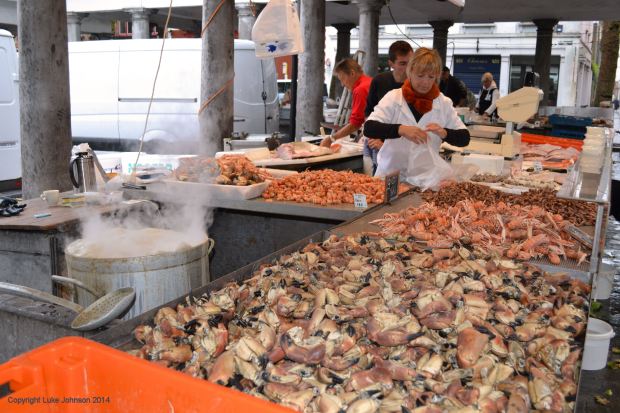 Mmmmm, shellfish. I regret not trying to ask about the contents of the big silver pot now

Just behind me as I turned to go, there was a very swanky looking restaurant. It seems this square was well established for the selling of fish and I can only imagine that the market and the restaurant go hand in hand. I did go and look at the menu, but the prices were very high, so I decided to cut my cloth and look elsewhere! 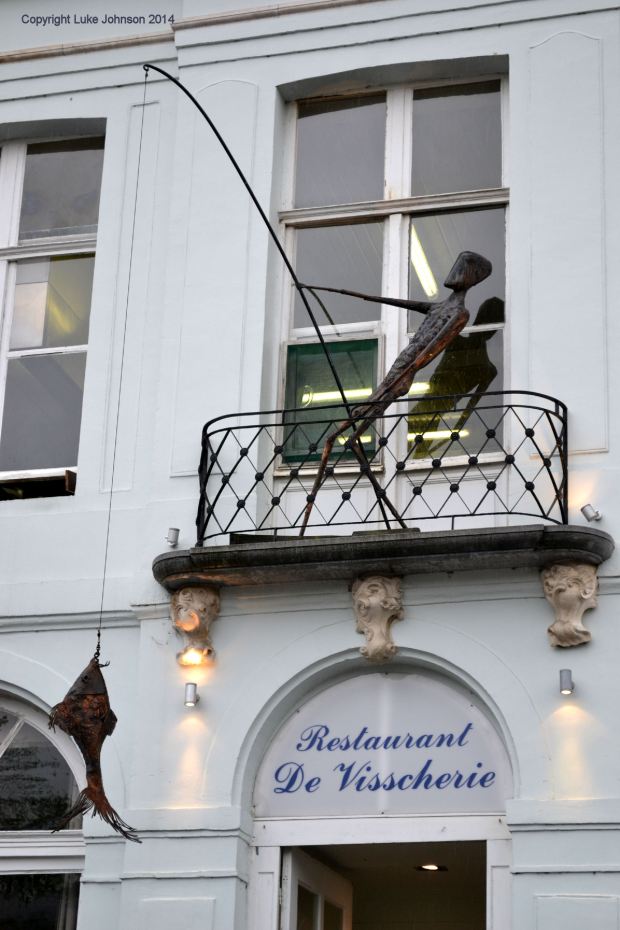 Ways to spot a fancy eatery number 1…it has its own statue above the door.

Further round the corner I stumbled upon a small museum (you find small collections of art and the like all over) where there were a number of artifacts that hand been dredged from the canals. Pretty impressive stuff that showed where the traders who plied the waters all those years ago came from, or indeed where they had been before. 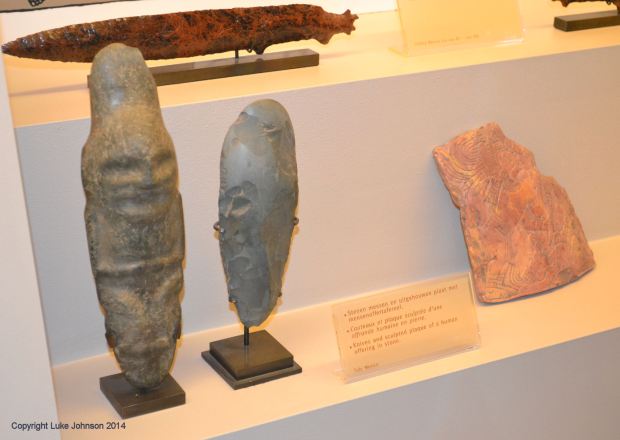 Onwards, forever onwards. One thing I did learn as I walked around is that the human ankle hates cobbles and the centre of Bruges is cobbled to death. Oh my god. After a day of walking, I found it necessary to sit and/or lie on my bed to wait for the throbbing to die down. I then realised why I saw so many bikes around. However, life of a bike wouldn’t be any more pleasant as I know from riding myself, as it tends to wobble bits you didn’t think were wobbly.

However, the payback for this was to see lovely buildings like this; this being the rear of one of the large churches in the city….

Lastly, a lovely wooden building right on the canal I found in the gardens that occupy the old city walls. I took many pictures of places like this and was hard to remember that pretty much all of these building are still occupied. Placing my nerdy DIY hat on, the maintenance is a World Heritage site must be quite difficult, so whilst it looks pretty, think of the cost and logistics of replacing those windows!

Confession to be made here, adjust the contrast on this to bring out the timber more. Lovely though isn’t it?

More wanderings to come in the next week or so. I am deffo at home now so will have the opportunity to write an entry in the evening when things are dark and dingy. Seems the weather is on the turn here, we have rain moving in overnight that is going to drown us all or something.

On that note, I find it a bit pathetic that the Met Office feels the need to warn us of rain with a specific yellow/amber/red symbol on a weather map when giving a forecast; surely the forecast of said rain is enough?! Maybe they are worried about being sued when someone gets their hair do ruined as it’s heavier than expected?

Anyway, rant over, see you next time for more images of Bruges, will be posting some taken at night too. Exciting! Ta-ta for now.